Sailing the open sea can be the perfect place to get away from it all, but we all know how imperative it is to stay connected while doing so. We are a society that thrives off the ability to communicate to anyone, anywhere, and anytime. Though finding the right solution to get satellite internet for boats may be more challenging than securing it on land, the maritime options available are the best we have ever seen.

From small vessel to vast fleet, open sea adventures to large-scale shipping operations, connectivity is essential for day-to-day communication. This requires finding the right maritime satellite internet solution that integrates seamlessly with the needs you or your team require.

For the times that you are docked in the marina or within 5-10 miles offshore, you’ll be able to utilize a typical Wi-Fi connection or obtain a cell signal. But that won’t work when you get farther out to sea which is why satellite internet is a necessity. The other challenge when it comes to internet on a boat is finding a way to maintain the connection even when waves are constantly rocking the boat back and forth or weather becomes severe.

Maritime satellite internet with the proper device is what you will require.

Obtaining Satellite Internet for Your Boat

For those heading out on a short, offshore excursion seeking a way to obtain an internet connection for themselves, a device like the Iridium Go! fits the bill. This portable device turns your own smartphone or tablet into one that supports a range of satellite communication functionality. But it doesn’t account for the movement challenges that arise on a boat.

So for those spending days at sea who require a reliable and faster connection similar to what you’re used to back home, you’re going to need a more robust device designed specifically for the needs required of anyone operating at sea.

The capability of the maritime satellite internet terminals and the networks they operate on have come a long way. By choosing the right fit, you can ensure that you have all the capability you need whether that’s getting the kids on a video call with Grandma or closing an important business deal.

For the high-speed internet you can rely on (because who has time to wait), your choices come down to Global L-Band Broadband or Maritime VSAT. So what’s the difference?

There are extensive options available via global broadband satellite. Whether you choose a device that operates on the unmatched worldwide network of Iridium or the proven network of Inmarsat, you can be confident in staying connected no matter how long you’re on the ocean.

Up to 6 concurrent calls

Up to 9 concurrent calls

Up to IP67 water and dust protection

Up to IP56 water and dust protection

For an affordable, yet high-performing global internet and voice solution for your boat, the SAILOR 250 is a solid choice.

Features of the Sailor 250 include: 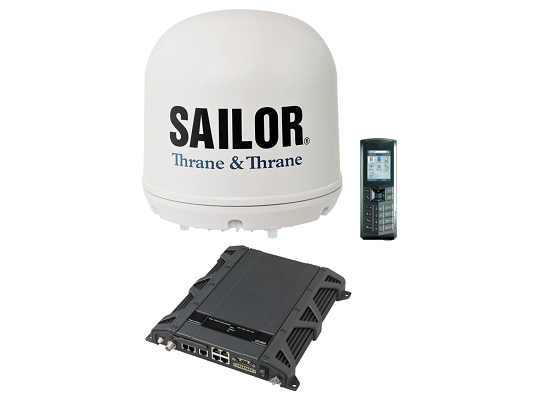 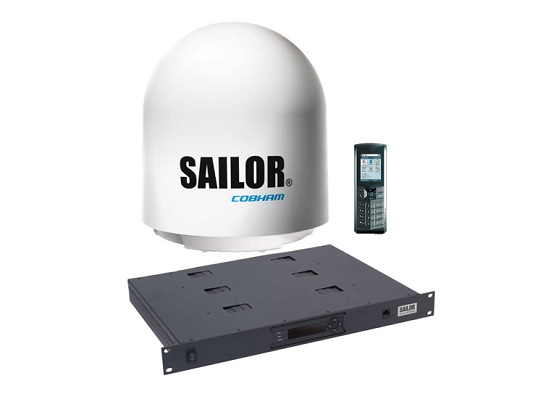 The SAILOR 500 offers a compact and lightweight solution with high-performing capabilities for those with increased connectivity demands.

Features of the Sailor 500 include:

For a top-tier option at sea that allows for 100% pole-to-pole global coverage, the Thales VesseLINK delivers.

Features of the Thales VesseLINK Maritime include: 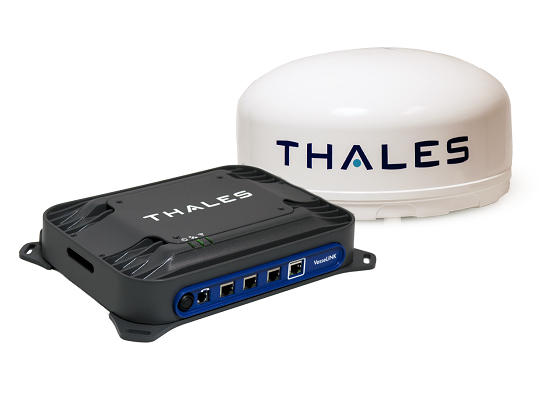 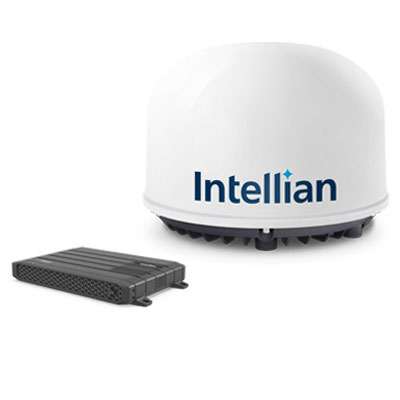 The Intellian C700 enables a variety of applications for those needing the most advanced features.

Features of the Intellian C700 include:

With Global Broadband, you’re able to get fast and powerful internet services at sea as well as almost every other remote area of the world. Fleet Broadband is Inmarsat’s proven maritime satellite services whereas Iridium Certus – Maritime is Iridium’s superior option for communication at sea. Both utilize an L-band operating frequency which is less susceptible to “rain fade.”

Maritime VSAT refers to the use of satellite communication via a “very small aperture terminal” on a ship sailing at sea. For ideal functionality aboard a moving ship, the antenna is stabilized with reference to the horizon and True north to always maintain a clear line to the satellite.

For a clear idea of how Maritime VSAT looks and operates, Cobham has a great infographic

The SAILOR 800 VSAT Ku is a standardized high-performance 3-axis stabilized Ku-band antenna system. Even though it has a small form factor, it’s been tested and verified that it is equal or higher to other 1m maritime VSAT antenna performance.

Features of the SAILOR 800 include: 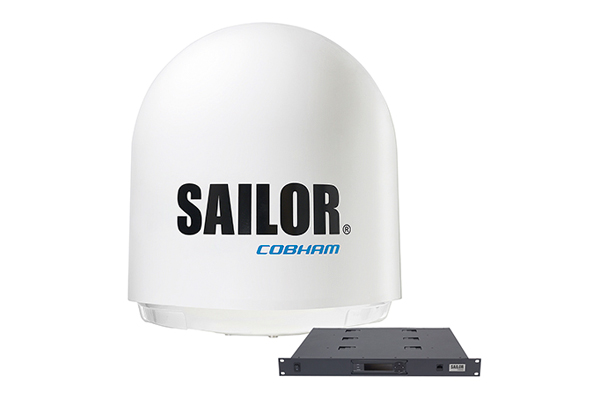 For increased power, users can turn to the Sailor 900 VSAT High Power.

Features of the SAILOR 900 include:

Features of the Intellian V85NX include: 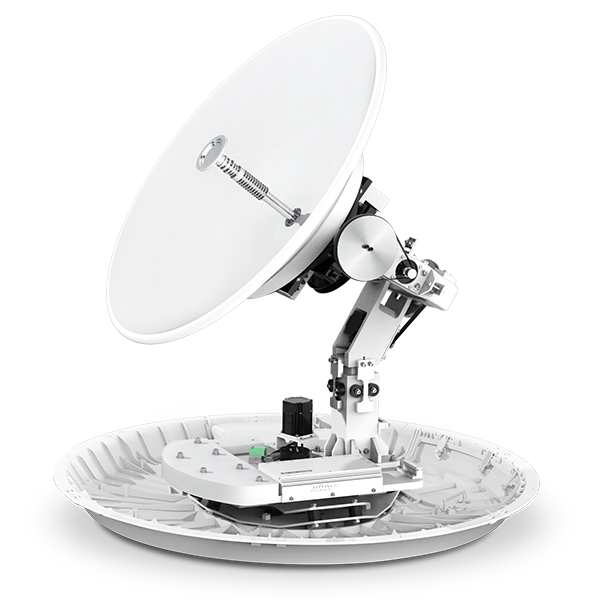 Features of the Intellian V100NX include:

L-Band terminals allow for a satellite internet connection from virtually anywhere in the world. A VSAT is a two-way ground (or fixed) station that sends and receives data via satellite. The terminal is a dish antenna generally smaller than 3.8 meters in diameter.

Each has the ability to provide users with internet access no matter where they roam in the world, including the waterways around the globe.

To get an uninterrupted connection and alleviate the unique challenges at sea, you’ll want to use a marine-specific network. Your options are Marine Specific L-Band Broadband or Maritime VSAT.

How do boats get the internet at sea?
How do I get satellite internet on my boat?

To set up internet on your boat, you’ll want to research various maritime satellite internet devices. Consider what you’ll the internet for to find a device that has the capability to meet the connection needs you require. Once you’ve chosen a device – you can find an excellent list here – you’ll need to get set up with the network that it operates on. Most high-quality marine systems (that can continue to function properly even on rough seas) will be fixed to your vessel. Once it has been installed and you’ve chosen a marine data plan, you’ll be set to sail!

How much does mobile satellite Internet cost?
What is the fastest marine satellite internet?

For the fastest satellite internet at sea, you’ll want to choose a high-powered maritime device on either the Iridium or Inmarsat network. Not only do these networks give you almost complete coverage wherever you sail, but they also deliver when it comes to fast, reliable internet. Choosing a proper device on these networks is important, too.

With the Thales VesseLINK and the Intellian C700, both operating on Iridium Certus, you’ll get download speeds over 700 kbps and upload speeds of 352 kbps. For VSAT technology, consider a device operable at 20W BUC, such as the Sailor 900 for reliable, high performance operation no matter the conditions. A device such as the Intellian V100NX, with its ability to easily convert between ku- and ka-band frequencies will deliver maximum speeds without interruption.

Which is the best maritime satellite internet provider?

For those that traveling via oceans is a way of life, you need a satellite network can meet the high-speed internet demands you require wherever you end up. Iridium Certus Maritime allows you 100% global coverage – necessary for anyone who may be sailing near the polar regions. Inmarsat, considered the pioneer in mobile satellite communications, offers reliable satellite internet covering 80% of the globe.