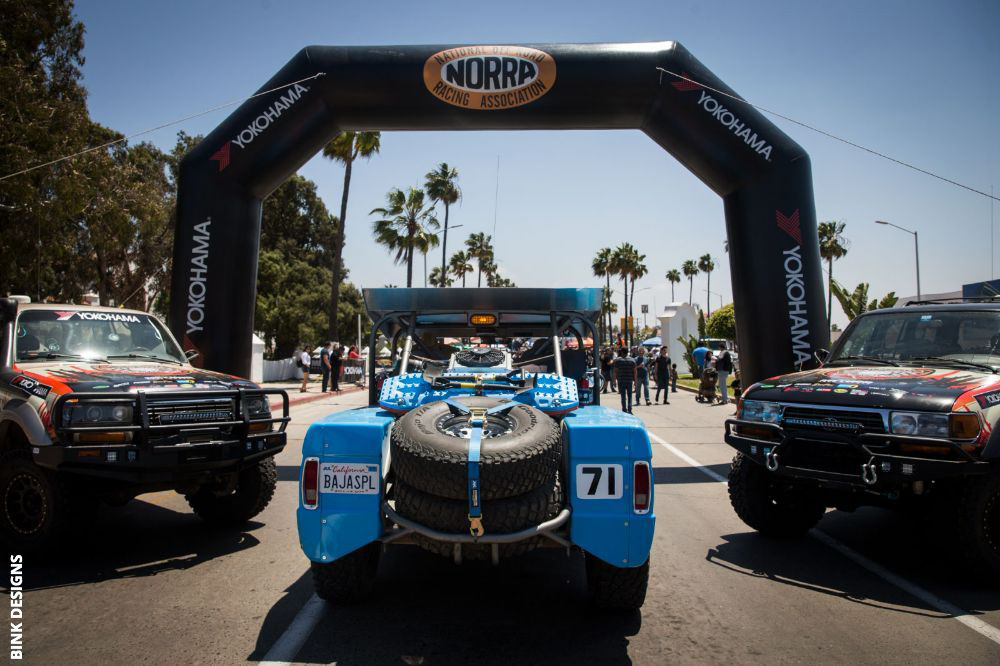 Over five decades ago, some of the most adventurous people around decided it would be a good idea to race from one end of Baja California to the other. Many decided it would be an honor to accomplish this tough, 1,000-mile off-road race full of danger and unknown, let alone be the one who could do it the fastest. It was the National Off-Road Racing Association’s debut race. You might know it as it is today – SCORE racing association’s Baja 1000 – possibly the most recognizable off-road race in the world. But whereas the Baja 1000 is a grueling journey where racers fight to the finish, the NORRA Mexican 1000 prides itself on a much more vital fun element.

There’s a reason the Yokohama NORRA 1000 has been dubbed “The Happiest Race on Earth.”

It can be a bit confusing because the current Baja 1000 race originated under the name of the Mexican 1000. (Which is an entirely different race than the present-day Mexican 1000). It was put together in tandem by Ed Pearlman and Don Francisco. After changing hands, the name changed. But in 2009, Mike Pearlman, son of Ed Pearlman, wanted to carry on his father’s legacy he built with his inaugural race so many years ago. And that’s when the current Mexican 1000 was created. It’s all about paying homage to the race’s humble beginnings and making something racers will want to come back to year after year.

Racers will find that the Mexican 1000 emphasizes camaraderie where lifelong memories can be made – with 4 full days of race excitement.

From the highest level of off-road competitors to the very inexperienced just looking for a new rush of adventure (and possibly a movie star sighting), the Mexican 1000 makes a place for them all. Though this rally aims to give competitors the experience of a lifetime where smiles and laughter are welcomed, that doesn’t mean racers won’t be showing their true grit when it’s time to head out on the rough course. But at least these racers know they can look forward to fun each night, making new friends while celebrating the culture and experience of Baja with food and drink.

NORRA racing places a much higher emphasis on racers finding joy in the journey than those seeking something with a “whatever it takes” mentality. There are plenty of other races out there for people looking for that experience. (Though that doesn’t mean you can’t go out and do your best to win.)

What kind of vehicles can race at the Mexican 1000?

Off-road adventurers will be glad to know that the range of vehicles allowed is quite broad. Entry fees range from about $2,500 – $4,000 depending on what time of vehicle you will be driving. The moto-bikes and the “Savvy Safari” OEM non-racing class are on the low-end. Evolution (modern) and Vintage cars and Evolution and Historic Trucks and Buggies make up the higher end. The technology of the vehicles allowed in this time-honored race has improved through the years, but that doesn’t mean you can’t race your Pioneer Era vehicle that’s still ticking. NORRA events are held on terrain selected with vintage cars in mind to minimize stress. Since this is all about friendly competition, they want all ages and designs of vehicles to be able to participate.

What can racers expect when they arrive?

Since this is a 4-day race, competitors will need to secure nightly accommodations. The options available are hotels in the area, rooms in the Bay of L.A., camping in NORRA’s Pit City, or booking an RV spot.

The party starts upon arrival in Ensanada, with a popular spot being the Horsepower Ranch. Crew, friends, and family are welcome to join in the festivities.

Final preparation is completed, and after that, it’s gone time.

This is what the race schedule will look like:

No matter what day it is, each daily launch is filled with excitement and fun. While this adventurous race is not for the faint of heart, there’s a reason it’s called the Race of a Thousand Smiles.